The Organization for Economic Co-operation and Development 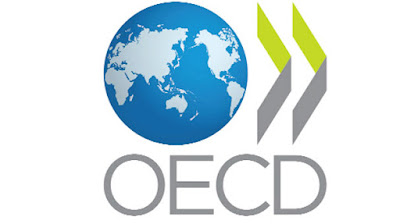 The Organization for Economic Cooperation and Development (OECD) is an intergovernmental economic organization founded after World War II, in 1961. It has 36 member States, which, most of them, are high-income economies with a very high Human Development Index. The OECD was created after European leaders realized that the best way to ensure lasting peace was to encourage co-operation and reconstruction, rather tan punish the defeated. It is for this that its main purpose is to stimulate economic progress and world trade. Its official languages are English and French and the headquarters of the organization are in Paris. This is how it looks like: The Secretary-General is José Ángel Gurría, the Deputy Secretary-General are Ludger Schuknecht and Masamichi Kono. OECD, as an international organization, is financed by its member States. Its Budget for last year was €374 million.
Publicar un comentario
Leer más

Creation of the OECD 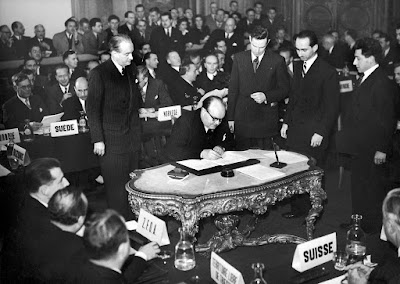 In 1948, the Organization for European Economic Cooperation (OEEC) was originally established to run the Marshall Plan. It is an US-financial plan for reconstruction of the European continent which was devastated by the war. Individual governments started recognizing the interdependence of their economies paving the way for cooperation which has changed Europe since then. After the success of the OEEC, Canada and the US joined the organization with the signature of the new OECD. It is with this signature when the OECD is officially born, on 30th September 1961. After this, other countries started joining such as Japan in 1964.
Publicar un comentario
Leer más 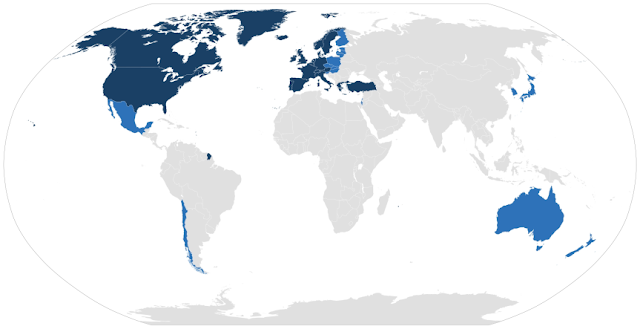 The OECD is a forum of countries describing themselves as commited to democracy and the market economy. We may say that it is a platform to compare policies, seeking answers to common problems, identify good practices and a way of coordinating domestic and international policies of its members. As previously mentioned, The OECD is composed of 36 member States. They are: Australia, Austria, Belgium, Canada, Chile, Czech Republic, Denmark, Estonia, Finland, France, Germany, Greece, Hungary, Iceland, Ireland, Israel, Italy, Japan, Korea, Latvia, Lithuania, Luxembourg, Mexico, Netherlands, New Zealand, Norway, Poland, Portugal, Slovak Republic, Slovenia, Spain, Sweden, Switzerland, Turkey, United Kingdom and United States. Here we have a chart with member States and the date on which they started to be members of the organization: In addition to this States, European Commission representatives participate alongside Members in discussions on the OECD´s programme, and are inv
Publicar un comentario
Leer más

Organisms of the OECD and their functions

Every international organisation has its own organisms that explain its functioning. In the OECD we can find three main organisms that rule the institution: 1. THE COUNCIL It has the decision-making power and it is composed by one representative of each Member State, plus a representative of the European Commission. The council meets regularly and the decisions are taken by consensus. (1) Once a year the OECD Council meets at ministerial level (Ministers or State Secretaries of Economy or Foreign Affairs) to set the priorities of the OECD. ( 1 ) 2. THE COMMITTEES Representatives of the member States of the OECD meet in specialized in committees to review progress in specific areas such as economics, trade… There are about 250 committees and about 40,000 senior officials from national administrations go to OECD committee meetings every year to discuss to contribute the work done by the Secretariat. 3. THE SECRETARIAT Headed by Angel Gurría ( 2
Publicar un comentario
Leer más

Decision-making in the OECD 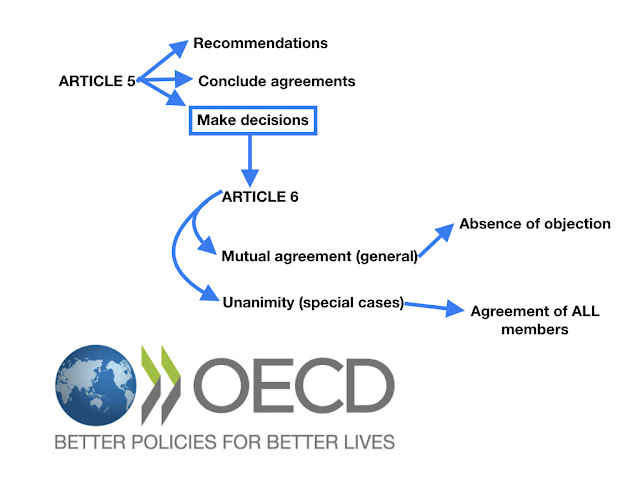 The decision-making mechanism in the OECD is ruled by the 1961 Convention: - Article 5: To achieve its objectives, the Organization can: Make decisions (unless it is said, thy will be considered binding). Make recommendations. Conclude agreements with Member States, no-members and International Organizations. - Article 6: Unless the Organization decided other way for special cases, the decisions and recommendations must be taken by Mutual Agreement (or Consensus). The designation of special cases requires unanimity. The Rules of Procedure clarify the difference between Mutual Agreement and unanimity: Mutual Agreement: refers to the absence of objection (abstention valid). Applicable to most of the cases. Unanimity: agreement of ALL member States (no place for abstention). Required in exceptional cases such as the adhesion of a new member State. To speed up the decision-making, the Council reformed the mechanism in 2004 introducing the QMV (Qualified Ma
Publicar un comentario
Leer más

Budget of the OECD 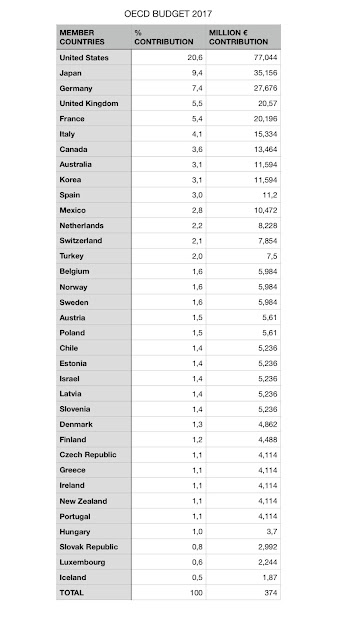 OECD is funded by its member States, which contribution varies depending on the size of each State's economy. Countries can also make donations to the institution to support outputs in the OECD programme of work. Members' contributions were up to 374 million €, distributed in the way shown below. How is the budget managed? The size of the OECD's budget and its programme are determined on a two-year basis by member countries. The Organisation's planning, budgeting and management are organised on a results-based system. A Supreme Audit Institution of an OECD member externally audits the accounts and financial management. In 2017, the auditor was the French "Cour de Comptes"(Court of Audit).
Publicar un comentario
Leer más

News about the OECD 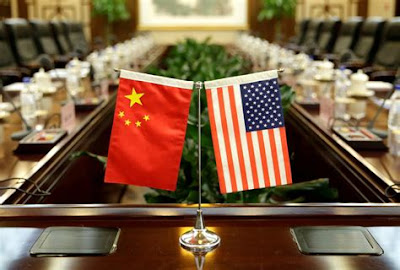 OECD WARNS OF TARIFF WAR RISKS TO THE GLOBAL ECONOMY The Secretary-General of the OECD has inform that an increase in trade tensions between the US and China could deepen the global economy´s slowdown by up to an additional percentage point by 2020. Trump´s office has established additional tariffs to imported chinese products worth $250 billion. as a respond to what is considered as unfair trade practices from Beijing. The OECD reduced this month´s global growth estimate to 3.5 percent for next year and the same rate for 2020. But the burden of activity could be greater if the trade war between the world´s two largest economies grows. According to Wall Street Journal, the United States and China are exploring a possible agreement by which Washington could suspend the imposition of more tariffs until the spring of 2019 in exchange for reforms in Beijing's economic policy.
Publicar un comentario
Leer más